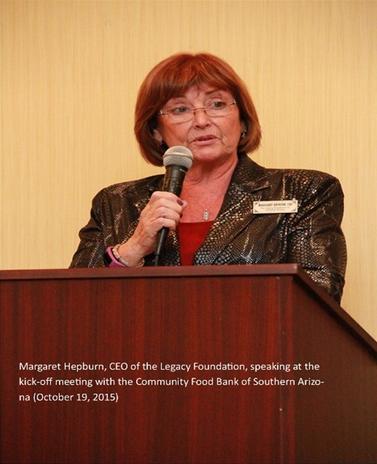 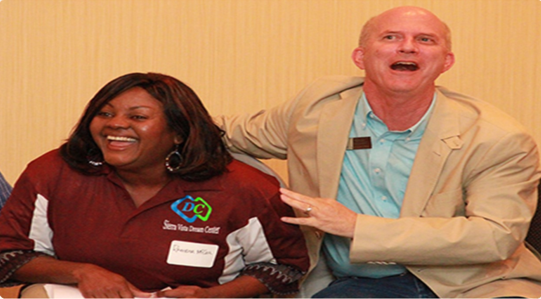 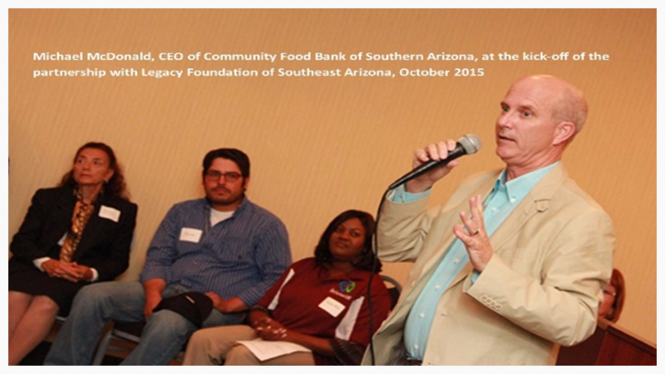 How about a collaborative partnership between a well-established community food bank and a $500,000 grant from the Legacy Foundation of Southeast Arizona?

In an effort to provide hunger relief in Cochise and eastern Santa Cruz counties, the Legacy Foundation partnered with the Community Food Bank of Southern Arizona.

According to an article by Bill Hess of the Sierra Vista Herald:

More than 20 percent of Cochise County residents are food deprived.

“They don’t know if there is going to be a next meal,” said Mike McDonald of the nearly 29,000 county residents who lack a dependable source of food with many going to bed hungry.

It’s a dire reality that McDonald, the CEO of the Community Food Bank of Southern Arizona, said must be addressed.

Based on 2014 figures showing the county has 127,448 residents and with McDonald’s 29,000 figure of those who are hungry, the actual percent is about 23 percent, or one out of four. The county has a number of food banks, such as the St. Vincent de Paul Society and the Salvation Army, and both McDonald and Hepburn said the organizations are critical components to be used in combating hunger.

Hepburn said one goal, of many, is to “reduce the need for emergency food and to improve health and wellness across many communities.” McDonald added that one important key is to reduce duplication in supporting those in need, recognizing “food is at the center of health and welfare needs for people.”

Calling the effort “Hunger Relief,” both CEOs said there has to be an effort to identify gaps, obtain additional partners and have strategies to ensure success.

Hepburn said the Legacy Foundation sees the grant as the first step in addressing a major health problem in the county, because hungry people are not healthy individuals.

Although the Community Food Bank of Southern Arizona is involved in work throughout the region, McDonald said the largess from the Legacy Foundation is earmarked for Cochise County. A critical aspect is to make sure children do not go to bed hungry, noting probably 30 percent of Cochise County kids do.

When it comes to children, the various school feeding programs are critically important, “but so is making sure the children have a good meal before going to bed,” he said.

Like ensuring food can be spread out over more than one meal, stretching the grant is important as well, McDonald said. It means seeking out more grants to ensure the Legacy Foundation funds are increased so that those who are helped “become more self-reliant … and develop a new mindset,” he said. 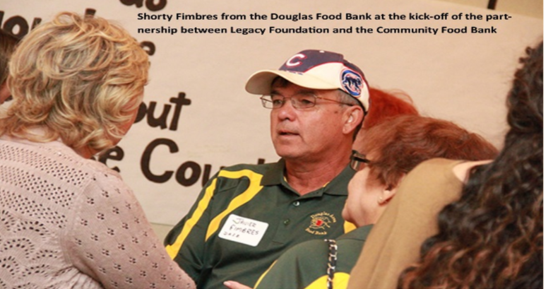 When it comes to fighting hunger in Cochise and eastern Santa Cruz Counties, what could possibly be better than having a well-established community food bank stepping in to help?