​Margaret Hepburn RN, CEO of the Legacy Foundation, has been named 2015 Healthcare Leader of the Year by the Arizona Hospital and Healthcare Association. In announcing her selection, Greg Vigdor president of the state hospital association said: “the impact you have had on your organization and community is truly commendable...”.

Prior to joining the Legacy Foundation, Ms. Hepburn was CEO of the Sierra Vista Regional Health Center.

Nominated by the Legacy Foundation Board of Directors, her nomination was endorsed by Mayor Rick Mueller and Cochise College President Dr. J. D. Rottweiler.

Commenting on Ms Hepburn’s nomination, Mayor Mueller wrote: “She is the epitome of a health care professional who has had what will be a lasting impact on health care in our region!”

Dr Rottweiler commented: “...I’ve had many opportunities to work with Margaret and have witnessed the leadership, care, and value she brings to the communities we jointly serve.”

There were several selection criteria for this honor : Leadership in the Advancement of Healthcare Delivery in Arizona; Personal, Public, and Financial Commitment to Improving the Health of Arizonans; Special Contributions to or Leadership in Local, State, or National Professional Organizations.

Ms Hepburn was cited for providing the executive foresight and strategic leadership that resulted in the construction and opening of a much needed 100 bed community hospital as well as for her leadership in founding a 60 million dollar healthcare foundation to promote population health and community wellness. She also was acknowledged for being instrumental in providing a 97,000 square foot instructional center for Cochise College.

In addition to her local accomplishments, she has co-authored an article for a professional healthcare magazine and has spoken on several occasions to national healthcare audiences.

The leadership award was presented to Ms Hepburn at the hospital association’s annual meeting in October.​ 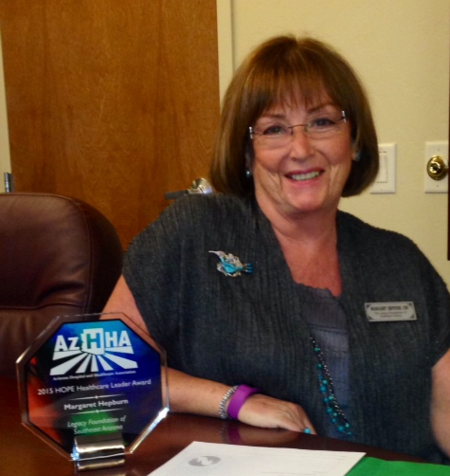