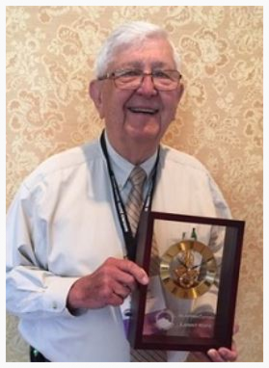 During the 19th Annual Western Regional Trustee Symposium on June 10-12, 2015 at the Sun Valley Resort in Sun Valley, Idaho, Dr. Lanny Kope was presented with a token of appreciation for his tireless efforts to provide trustees with affordable, quality governance education. It has been nearly 20 years since the inception of WRTS, which

Dr. Kope co-founded, and he still provides education at the symposium as a presenter.

Lanny A. Kope, EdD, has been a hospital trustee for more than 30 years, serving on urban and rural hospital boards. He is the immediate past board chair of Sierra Vista Regional Health Center and is currently serving as secretary of the Legacy Foundation of Southeast Arizona. Dr. Kope has had national responsibility as chair of the American Hospital Association’s Committee on Governance and currently serves as a member of the National Board of Advisors with the Center for Healthcare Governance. He is a also a University of Phoenix faculty member in healthcare.

The Beginning of Something Special

In the mid to late 1990s, pragmatic and inexpensive educational opportunities for hospital trustees were not readily available. There were occasionally national trustee programs, but these were usually expensive, precluding attendance by trustees from smaller hospitals and limiting the number who could attend from other hospitals.

In the midst of this challenge to provide meaningful and reasonably priced trustee education, three hospital trustees: Liz Molina from Gritman Medical Center in Moscow, Idaho; Jane Oehm from Exempla Healthcare in Denver, Colorado, and Lanny Kope from Phoenix Memorial Hospital in Phoenix, Arizona, had a dinner conversation at an American Hospital Association (AHA) sponsored event.

They were concerned that the changing face of healthcare was requiring more and more trustee knowledge of its dynamics; yet, meaningful and inexpensive educational opportunities were not readily available to fill the educational void.

These trustees reasoned that regional rather than national programs would be of greater benefit to trustees in AHA’s Region 8, and these programs could be implemented at a reasonable cost. A further consideration was that hospital trustees were in the best position to know what educational topics were appropriately suited for and most needed by trustees.

These three trustees continued their discussions over a few months and scheduled a meeting with the association executives from the AHA Region 8 states: Arizona, Colorado, Idaho, New Mexico, Montana, Utah and Wyoming.

The three trustees met with the state association executives and put forth a proposal: (a) Have an annual trustee symposium for trustees in Region 8 and invite trustees in neighboring states as well; (b) Use experience-based speakers who would be willing to share their knowledge and who would waive a speaker’s fee; (c) Create a steering committee of two people from each Region 8 state – one trustee for curriculum and program design and an association staff member for administration and logistics; (d) Rotate the program location from state to state on an annual basis; and (e) Be prepared to underwrite any financial shortfall that might occur.

The Western Regional Trustee Symposium (WRTS) was born on April 25-26, 1997 at the Inn at Loretto in Santa Fe, New Mexico. Mother Nature christened the new educational undertaking with a snow storm!

A planning committee was formed of two individuals, one trustee and one association staff member, from each state which has continued to be a successful organizational structure to this date. The planning committee is chaired by a hospital trustee. The American Hospital Association contributed start-up funding and continued to support the WRTS until it became a self-sustaining entity.

The ultimate goal of the symposium is to form and maintain healthcare governance excellence at each hospital in the western and midwestern United States.

The Western Regional Trustee Symposium (WRTS) offers quality healthcare governance programming at an affordable cost. Designed for hospital board members and executive leadership, the program broadens the participants’ awareness of current healthcare trends that affect them, and how they serve their boards and communities. Best practices of successful healthcare governance are shared for practical application in the boardroom.

WRTS provides excellent networking opportunities for trustees and leaders from hospitals of varying size and scope. This symposium is geared toward rural and Critical Access Hospitals, and aims to challenge conventional thinking with fresh approaches to standard healthcare governance concerns and business practices.

You can learn more about the Western Regional Trustee Symposium at www.trusteesymposium.org